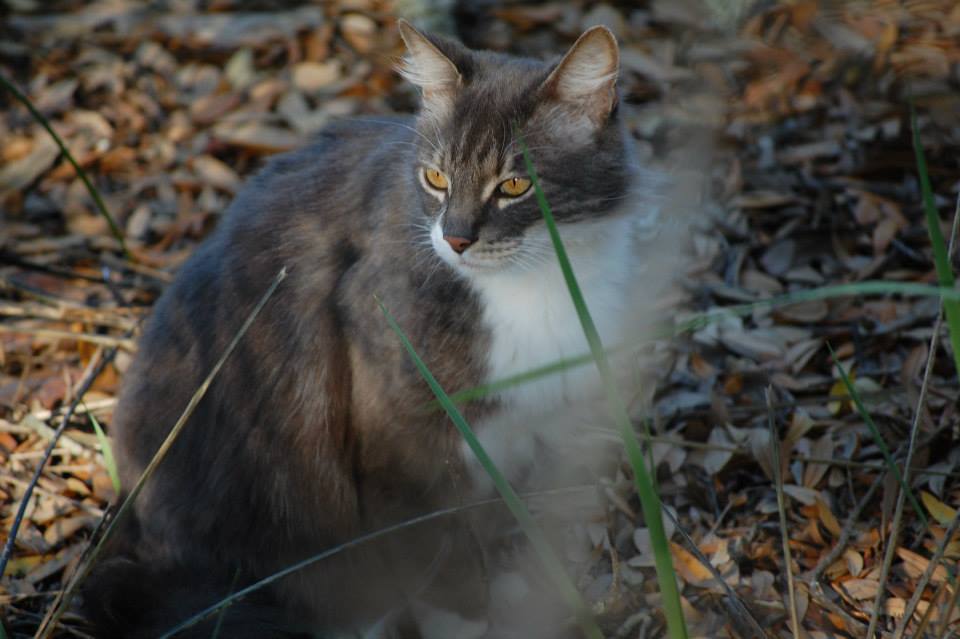 It was an unusually long day because it started way too early. I woke up at 3am and couldn’t go back to sleep. I tossed and turned for a few hours, bordering on the cusp of sleep a few times but never obtaining it. Amazingly, I made it through the morning on just my usual two cups of coffee. By about 2pm though, I was exhausted. And by the time I left work after 5pm, everyone and everything irritated me.

I got home and after spending a little time with Chris and the kids, I poured a glass of floral tea and sat on the patio to unwind and enjoy the setting sun. My cat Smokey was out, too. He was a stray when he adopted us nearly 10 years ago. We THINK he’s about 13 years old. We THINK he’s at least part Norwegian Forest cat. We KNOW his breath is about the worst on the planet. 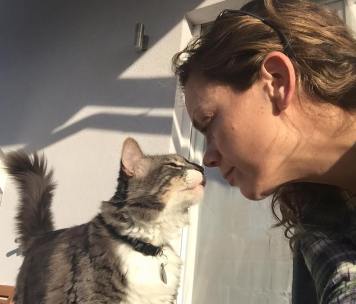 Smokey is my cat…as in I’m his “person” and he trusts me. I’m the only one he will allow to pick him up. I’m the only one who he seems to allow in his personal space, which means he thinks he can get into my personal space. When he wants pets from me, he touches his nose to my nose. It’s cute the first 15 times. When it’s 2am and he’s doing it, it’s not so cute. He is skittish around everyone, even me. I don’t know what his life was like before he came to my house, starving but so sweet. I know he had a home before mine because he was fixed, potty trained and house broken. But his long fur was all in knots and he weighed 6 pounds. For comparison, he weighs 13 now and he’s still a relatively slim cat.

I remember when Chris first caught me feeding him on our front porch in Texas in 2006. It was about two weeks after I had ZJ. I was very slowly walking to my mail box (because you tend to do that for a few weeks after a C-section) and Smokey met me just as I was leaving the house. I went back inside the house and got something to feed him. I don’t remember what it was. Let’s just say, that wasn’t the first front-porch snack Smokey received from me. When I was well enough to meander to the grocery store, I picked up a bag of cat food just in case the stray, gray cat continued to stop by. I was feeding him some Meow Mix when Chris came home and said, “What are you doing?” His voice reminded me of what I 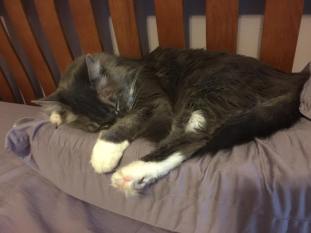 sound like when I catch my kids doing something they shouldn’t be doing. I told him I was feeding my cat. He said, “Oh really. And what is your cat’s name?” I said, “Uh, Smokey.” The next day we took him to the vet and got him all his shots. On the way back we stopped by a pet store to get him a bed, a scratching post, litter box, litter, some toys he’d never play with, treats, and catnip (for his glaucoma). That was it. He was mine. And I was his.

Fast forward 10 years. Smokey is brave enough to put his nose to mine at 2am. He has thrown up on every carpet and sofa in my home and he tolerates me shaving his butt so his poop doesn’t get stuck in his fur. We are close. So it’s on this evening when I’m tired and just “done” with being around people, that he sits on the patio with me. We’re doing our own thing though so I’m not paying attention to him. After checking my Instagram 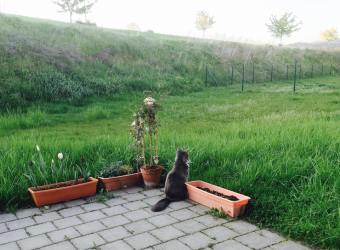 account, I look up and see Smokey in stalk mode. I can’t even see what he’s about to pounce on though so I assume it’s a bug. I get up so I can get video of my cat in stalk mode. For a few years, I was a videographer in the Air Force in Charleston S.C. “Document and transmit” was the mission and so I was going to “document” my cat making a fool of himself. And I was gonna “transmit” it on Facebook. Smokey wasn’t quite the stalker he used to be so I was prepared for a giggle.

I got my camera and walked to the side of the patio to get a better shot. Smokey was not stalking a bug or even a mouse. There, in front of him, was a beautiful white dove. If you’re from my town in Germany, white doves are rare. At least I think they are. I never see them so I’m going to say they’re rare. And here’s Smokey about to pounce on one. Now, there’s a bit of a distance between Smokey and the dove and like I said, he’s not as spry as he used to be so I’m got my phone ready to document what I thought would be pretty hilarious.

I was about three seconds into the recording when the unthinkable happened. Smokey leaped and caught the dove in his mouth. He turned around, the stunned dove in his mouth, and walked back toward me. It is at this point on my video that I curse and turn the video off.

I walked in the house and yelled for Chris. Smokey is trying to bring the dove into my house and I block him. I look at the dove and it’s looking at me. It’s just not right. I go inside and yell for Chris again. Smokey looks for a place on my patio where he can dismember the bird and decides under my bench is a good spot. Chris comes outside and immediately sees what happened. Smokey drops the dove who flaps and flops across the patio and back on the lawn. It’s clearly hurt. Smokey is fairly uninterested during all of this. He doesn’t try to catch the bird, he just watches it from a distance. Chris told me to go back inside and get a towel to wrap around the injured bird. I admit, it takes me a while to do this because really, what towel do I want ruined. I went in the kitchen to grab a dish towel. Nope. Not gonna sacrifice one of those. I go downstairs and grab an old beach towel, run back up the stairs, and out the door with my old Jacksonville Jaguars beach towel that is more than a little threadbare. The bird is out of sight. Chris tells me it flapped down the side of the house and is gone. No way it’ll live for long.

My neighbor is watching all of this by the way. She’s looking at me like I’m an animal killer. Like I allowed this to happen. I guess I did. I didn’t think it would happen quite like that but holy crap, it did. I have no idea how to react, how I should feel. My daughter’s 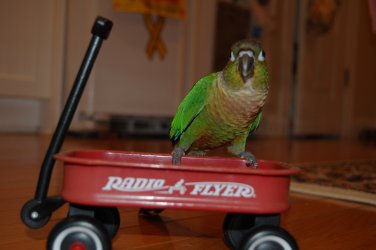 parakeet died earlier this year as did my son’s Green Cheek Conure, Seymour. We are a bird loving family. And a cat loving family. What do you do when your cat kills a bird and you like birds? What do you do when your neighbor is looking at you like you’re some kind of monster? And that poor dove, the rare dove with that look in its eye as Smokey held it in his mouth. Maybe it’s a sign I’m going to hell because I let my cat catch a rare, white dove. Oy.

I go back in the house and swap out my tea for a glass of wine. As I stroll back out to my swing on the patio, I walk by Smokey who will get a good scrub down and brushing later, because Mama doesn’t let cooties get in the house. My gray, part stray, long-haired, bad-breathed, nose rubbing, butt shaving, bird catching kitty walked up to me looking for a few scratches behind the ear. I did what any good pet parent would do. I scratched him behind the ear and said, “Good job Smokes. Way to get the bird.” 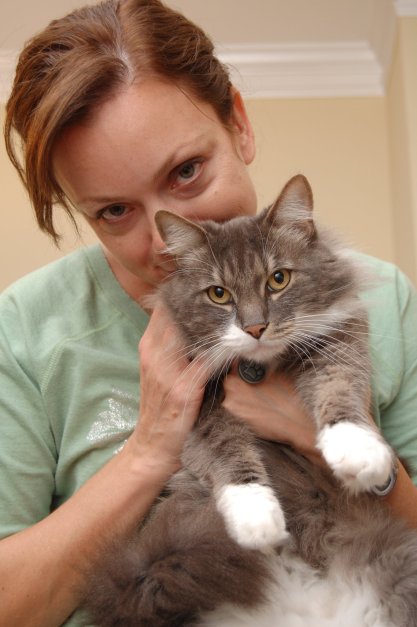 *All photos and video by the author.

2 thoughts on “National Geographic…in my backyard”